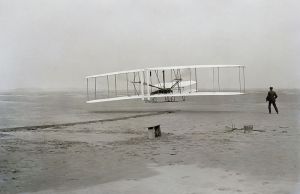 Orville (piloting) and Wilbur (at wingtip) Wright on their first flight in 1903.

Over one hundred years ago today, in 1903, Wilbur and Orville Wright brought their “flying machine” to Kill Devil Hills, North Carolina, and soared through the air in a contraption that was “heavier than air.” The news was a sensation, and once more, like mountain climbing, a few determined women took to flight as well. I was reminded of this in a recent episode of HBO’s 1920s period drama Boardwalk Empire, which featured a woman pilot who endeavors to fly alone across America. In reality, the pilot, as creative producer Terence Winter explains, was modeled after Neta Snook, the woman who taught Amelia Earhart how to fly. And yes, if you are wondering, this all connects to Annie Smith Peck, since she also took to the skies, once she had accomplished her major mountain climbing feats, at the age of 80.
New air service from Panama to South America inspired Peck to take a seven-month, twenty thousand-mile tour in and around South America on some of the first available commercial flights. Upon her return from her tenth and last trip to South America, she wrote her fourth and final book, Flying Over South America: Twenty Thousand Miles by Air, which was published in 1932. And, Amelia Earhart, who, along with Peck, belonged to the Society of Women Geographers, championed her book, including writing her endorsement for the dust jacket. Reflecting on Peck’s career in climbing and exploration, Earhart noted,

“I felt an upstart [compared to Peck]. [Peck’s climbing career] “gives me the impression … I am just a `softie.’ However, I am somehow comforted by the fact that Miss Peck would make almost anyone appear soft.”

Peck was also acquainted with Wilbur Wright, and you can read that humorous story here, which she wrote about in her last book: 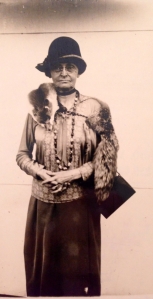 Annie Smith Peck, circa 1925, between the end of her climbing career and taking the first commercial flights around South America

Have you ever been in an airplane? Or are you determined to stay on terra firma, never risking  your life in one of those machines which have  brought death to many? In either case you may like to read the story of a long flight by a woman in her eightieth year; no sensational tale with  more of fiction than of fact, but a true account  of the journey, with information as to the development of air service in South America, its unprecedented safety, and the unrivaled beauty and splendor revealed to one who flies over and around that continent.

The notable flight of Colonel Lindbergh in 1927 was needed to spur our own people to a rapid development of this mode of travel; but in South America, where the difficult physiography of most of the countries had hampered  road construction of all kinds, the utility of  air service was earlier apparent, and in several  countries it had been installed.

In the days of my youth, Darius Green (with a  flying machine) said, ‘The birds can fly, and  why not I?’ Unlike the majority in those days  I sympathized with the idea, though his flight  was a flop. I had, however, no expectation that  in my day the vision would be realized; and in  1903, when I sailed for South America to climb  one of the great peaks of the Andes, I did not  dream of ever flying over or around them.   But a few weeks later, Orville Wright flew fourteen seconds on Kitty Hawk Hill. In 1908, about the time that I climbed the north peak, 21,812 feet, of Peru’s highest mountain, Huascarán, a flight of one hour was accomplished.  In 1909, being then in the height of my glory, so to speak, I ventured to call on Wilbur Wright at the Hotel Vanderbilt a day or two before he  was to fly up the river for the Hudson Fulton  Celebration. Mr. Wright received me with much  courtesy, but to my inquiry if I could go with  him he responded that he would take me if  anyone; but he would make the flight alone.

To be the first woman to fly had seemed worth  taking a chance; but why be the thousandth?  No joy-rides for me! though in later years an  invitation from Colonel Lindbergh for an hour’s  flight would have been promptly accepted. Had  he been aware that I had climbed higher on my  two feet than he in his airplane, perhaps he would  have asked me.

Although exaggerated description by persons prone to thrills may be entertaining, aviation will be better promoted and more persons will be tempted to undertake a tour of this kind by an accurate sketch of the comforts and pleasures of the journey. 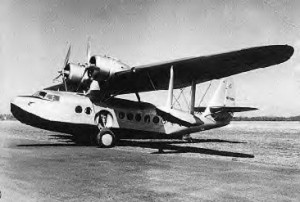 Commercial air service along the coast in Peru, began by Panagra in June 1928, was carried on by the Panagra and Faucet Companies. The Panagra planes in which Peck traveled included twin-motored Sikorsky amphibians for four passengers, with a crew of three. On her trip in 1929, Peck was the only passenger on the plane, since commercial flights were in their infancy.

Presenting in this volume many beautiful pictures taken from the air, a recital of my own experience and observation, and brief description of places so quickly and comfortably visited, I hope that many will gain, by reading, a superficial acquaintance with the continent, and that  those who can afford it, young, middle-aged, and  elderly, may be persuaded to undertake this truly delightful tour.

Many  points were so visited, far from the beaten track,  in addition to those included in an ordinary  tour.  A gushing young lady, who interviewed me for  a New York paper prior to my departure, appeared disgusted that I was not thrilled at the  prospect. In consequence, she referred to me  (in large letters) as a SCHOOLMARM the  first time I was ever so designated. My last  teaching, at Purdue University and Smith College, was years before she was born. ‘Thrills,” I said, “belong to one’s teens, but life may be  full of interest when these are over.” Flying is  now in the day’s work. I trusted that there would be no occasion for thrills, having no desire  to fracture my skull or any other part of my  anatomy.